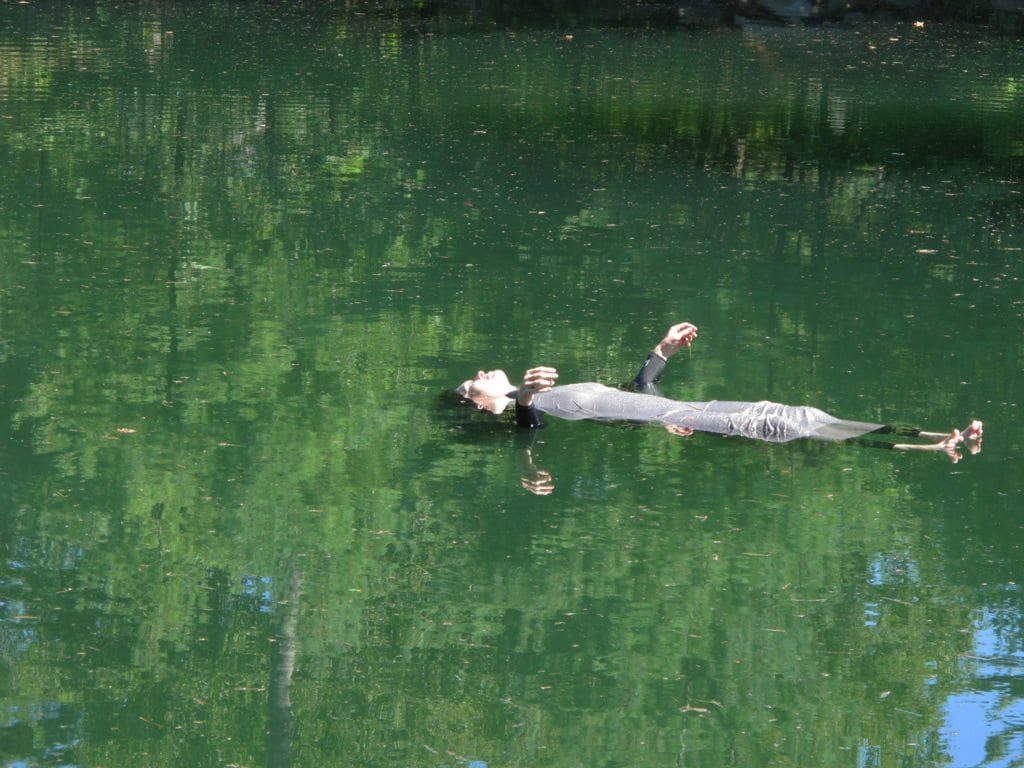 PERFORMANCES:  Many of Arsem’s works are durational in nature, minimal in actions and materials, and often located in peripheral spaces in the context of larger events, where viewers discover the work on their way to seeing other performances. Arsem regularly creates performances for galleries, but in the last 20 years she has focused on site-responsive performances.  They are often designed for audiences of a single person, and respond to both the history of the site, as well as to the immediate landscape and materiality of the location.  Her performances are designed to implicate the audience directly in the concerns of the work, to create an experience that is both visceral and intellectual.  She incorporates a broad range of media, and often engages all the senses. Sites have included a former Cold War missile base in the United States, a 15th century Turkish bath in North Macedonia, an aluminum factory in Argentina, the grounds of an abandoned tuberculosis sanatorium in Poland, the site of the Spanish landing in the Philippines, and a deserted Russian mining outpost in the Arctic Circle.

In 2019 Arsem presented Water Moving, a twelve-day performance at Arti et Amicitiae, in Amsterdam, The Netherlands, as part of the exhibition ‘Maalstroom.’  She performed at the IN>TIME Festival at Defibrillator in Chicago, Illinois, USA; at Performatorium Festival of Queer Performance 7: Bad (Ass) Bodies, in Regina, Saskatchewan, Canada; and the Salt Lake City Performance Art Festival, Utah, USA. In November she will perform at the 14th Bienal de Curitiba, Brazil.

Some recent highlights include participating in the 2018 Performance Train of Transart Communication 30 International Performance Art Project, traveling by train from Budapest to perform in Prague, the Czech Republic and Krakow, Poland.  She also performed as part of Arctic Action Live Performance Art Festival Spitzbergen 2016.  In early 2016 she completed 100 Ways to Consider Time, 100 different six-hour performances in 100 consecutive days, at the Museum of Fine Arts, Boston.

AWARDS:  She has been the recipient of fellowships, awards and grants since the 1980s.  Recent awards include the 2015 Maud Morgan Prize from the Museum of Fine Arts, Boston; a 2017 Massachusetts Cultural Council Fellowship; a 2017 City of Boston Artist Fellowship, and project grants in 2017 and 2018 from Boston Foundation’s Live Arts Boston program.

PUBLICATIONS:  A book on her work, Responding to Site: the performance work of Marilyn Arsem, edited by Jennie Klein and Natalie Loveless, will be published in early 2020 by Intellect Press of the UK.  In 2015 the Museum of Fine Arts, Boston published an I-book, The Performance Art of Marilyn Arsem, which includes essays by MFA curators, as well as images, video and audio excerpts of her work.  Arsem has also published articles on her work, including in Lynette Hunter and Shannon Rose Riley, eds., Mapping Landscapes for Performance as Research: Scholarly Acts and Creative Cartographies. London: Palgrave MacMillan, 2009.

TEACHING AND LECTURES:  Arsem established one of the most extensive programs internationally in visually based performance art at the School of the Museum of Fine Arts, Boston (SMFA), where she taught for 27 years.  In 1987 she was hired to teach one class in performance and ultimately expanded the performance department to include four faculty members offering 10 different 13-week classes each semester in performance art that covered different aspects of the practice, as well as its history and theory. Working primarily with Master of Fine Arts candidates, Arsem’s courses focused on such topics as site-specific work, durational work, personae in performance, documenting the ephemeral, Fluxus and Dada, performance in conceptual art, street performances and interventions, scores and systems, collaborative work, and more.  A feature of the performance curriculum was regular visiting international performance artists who gave artist talks, did projects with the students, and performed.  The students also traveled and performed at international festivals.

Arsem has given lectures on performance art and on her work throughout the USA, as well as in Argentina, Brazil, Canada, Chile, Germany, Finland, Germany, Indonesia, Ireland, Israel, North Macedonia, The Netherlands, Northern Ireland, Taiwan, Thailand, UK, and Wales.

EDUCATION AND AFFILIATION:  Arsem received her BFA from Boston University in 1973.  She went on to establish Mobius Artists Group, an interdisciplinary collaborative of artists which she founded in 1975, and incorporated in 1980 as Mobius, Inc., a non-profit, tax-exempt, artist-run organization. Mobius’s mission is to generate, shape and test experimental art. The members of the organization believe an effective strategy for supporting this art is to establish grounds that build relationships among fellow artists. Mobius has long been committed to creating artist exchange projects bringing artists from different geographic regions to work together. The international exchange projects have focused on site-specific and publicly sited work.  Mobius has presented work involving thousands of artists over its 40+ year history and is recognized as one of the seminal alternative, artist-run organizations in the U.S.A.